From Mainframe to NC Workstation

Times change, and today even mainframe-oriented operations need to comply with requirements for low-cost/high-tech solutions to stay competitive. For those manufacturing challenges, a product that delivers high performance at low cost is a practical solution that can benefit all companies regardless 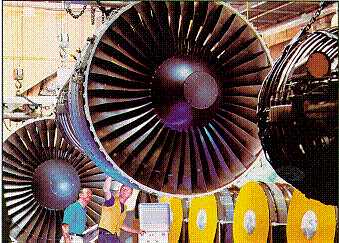 Pratt & Whitney is a good example of a large-scale operation faced with finding a more practical approach to NC machining. The parent company for Pratt & Whitney, United Technologies, is number 125 on the Fortune Global 500 list of companies. Commercial and military aircraft worldwide run with engines produced by Pratt & Whitney. Under contract to supply 51% of the Boeing 777 engine orders, its 84,000-lb. thrust engine received FAA (Federal Aviation Administration) certification on schedule and has performed well.

The Pressures of Rightsizing

With recent downturns in commercial aircraft deliveries, however, and with pressure increasing to cut costs, some changes had to be made. "Down on the shop floor the problems are still the same basic issues facing so many other large and small manufacturers. We needed to [make the] transition from a mainframe to a workstation computing environment and needed a workstation solution for our APT (automatically programmed tooling) and CAD/CAM (computer-aided design/computer-assisted manufacturing)," say Dan Creamer, Team Leader at Pratt & Whitney.

"It's a problem that certainly needs to be addressd... The entire aerospace industry is facing the challenge of rightsizing; any company that isn't, should be. Computing technology, (with) products such as CIMpro from Intercim, make "

"It is a full five-axis APT system capable of servicing large manufacturers such as Pratt, and has been proven over the years in practical usage," says Ven Sudhakar, Director of Intercim's NC Division. "It is available on PC (personal computer), Windows NT* and many popular UNIX workstations. Pratt chose the Sun platform for their needs."

Based on Intercim's 25 years in the factory automation business, Pratt & Whitney recognized that CIMpro, a language-based NC programming tool, would be the best option for this job, because no other product met the cost and licensing requirements we had," explains Creamer. Pratt began replacing their IBM APT system with the CIMpro manufacturing system in 1994 and now has its business units in four states using the new system.

Creamer noted that since CIMpro is comparable to APT syntax the installation was no problem. "Intercim tailored the product to our existing environment, so while training was and is available to us, we didn't require it," says Creamer. Pratt & Whitney had CIMpro running quickly, because product fit was a prime concern right from the first. The ease of transition was another reason for the choice. "We have the potential of transferring over 20,000 programs and shutting down manufacturing is not an option for us," says Creamer.

Although the CIMpro APT solution was sound, some of Pratt & Whitney's APT programs could have been using an in-house syntax that was specifically designed to increase productivity. As part of the changeover, Intercim implemented specific changes in the APT to make any manual modifications unnecessary. "This easy transition is unheard of in the NC industry since changes to the APT "says Sudhakar.

Concerned about disrupting operations, Pratt was cautious about implementing the CIMpro system and conducted a pilot program before making a widespread commitment. As it turned out, the implementation was completed without any problems. Intercim's partnership approach was designed to meet Pratt's needs and virtually guarantee success. Sudhakar explains, "A joint effort between vendor and customer is very important. We had a good APT product to offer and with Pratt's experienced team we worked together to produce the (end) result.

As for Pratt's perspective, Creamer says, "For every product we bring in, we evaluate multiple suppliers so we are definitely not locked in to just one vendor, But Intercim has done a good job for us; and because of the success of our initial venture we consider Intercim a partner, and in the future will look to them for other manufacturing needs."

In the world of art-to-part, the bottom line is that the most innovative manufacturers make use of up-to-date automated systems on the shop floor to do the job faster, more accurately and at lower cost. At Pratt & Whitney CIMpro fulfilled their need for NC programming in a client/server environment on a commom computing platform.

* Windows and NT are trademarks of Microsoft Corporation.